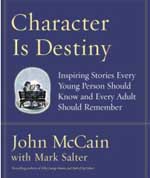 Character Is Destiny by John McCain with Mark Salter

As in last year’s Why Courage Matters, McCain’s latest volume uses biography as an illustration of virtue, but this time the senator broadens his palette significantly, telling 34 stories of heroes whose lives embody qualities ranging from honesty and loyalty to curiosity and enthusiasm. At the root of them all, he says, is a willingness to stay true to one’s conscience against all challenges. Thus martyrs appear prominently, from Thomas More and Joan of Arc to Edith Cavell and Father Maximilian Kolbe, as do military heroes, including Pat Tillman, the pro football player whose love of country led him to enlist in the army shortly after 9/11.

But the pantheon is inclusive enough to hold Aung San Suu Kyi and Gandhi alongside Churchill and Eisenhower. Although he is reaching out to a younger readership, McCain’s plain but sincere language does not condescend to his audience. He makes occasional oblique references to his experiences as a prisoner of war—describing, for example, how they reinforce his understanding of Victor Frankl’s concept of dignity—but the only chapter centered on his ordeal highlights a furtive moment of kindness from a Vietnamese soldier. Amid much speculation concerning his plans for 2008, McCain has made a declaration of values that liberals can embrace as readily as conservatives.
Copyright © Reed Business Information, a division of Reed Elsevier Inc. All rights reserved. 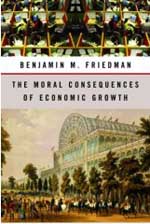 The Moral Consequences of Economic Growth by Benjamin Friedman

Ever feel like you just can’t get ahead with the bills? You’re not alone. More than half of Americans believe the American dream has become impossible for most people to achieve. And two-thirds think this goal will be even harder for the next generation. (One reason for the gloominess–average full-time income has fallen 15 percent since 1975.) All this has Benjamin Friedman worried. In his hefty, 549-page tome, The Moral Consequences of Economic Growth, the acclaimed Harvard economist and advisor to the Federal Reserve Board says economic stagnation is bad for the moral health of a nation. Friedman, a former chair of Harvard’s economics department, argues that economic growth is vital to social and political progress. Witness Hitler’s Germany. Without growth, people look for answers in intolerance and fear. And that, Friedman warns, is where the U.S. is headed if the economic stagnation of the past three decades doesn’t soon reverse. It’s not enough for gross domestic product to rise, he says. Growth also has to be more evenly distributed. The rich shouldn’t be the only ones getting richer.