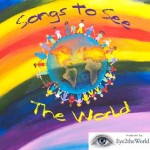 “Songs to See the World” is a wonderful collection of 14 children’s folk songs from many countries. Each is sung in the language of its native country. Seven performers ranging from children to adults recorded the music in the Performing Arts Center of Goshen College, a state-of-the-art facility. Randi Pickley, Eye2the World’s Director of Art Activities, coordinated these efforts. Here is a brief video clip describing the project: Included with the purchase of the songs are TWO bonuses.

The entire package, including 14 songs, descriptions of each song, and the comprehensive set of activities are available online from this site for only $14.95.

First of all, this album has been recorded by ordinary folks as well a professionals musicians because we believe that music should be shared and enjoyed with friends, no matter what the level of their ability. Among our ranks you’ll find opera singer, a professional guitarist, and a music teacher…. but you’ll also find a retired scientist, school children, and a mom. The point is that ANYONE can join in the songs, and in the process, learn a little bit about other cultures.

We have tried to give all of you a starting place to explore other cultures. We don’t pretend to speak each of these languages as a native of that culture would, but we have made an effort to understand the nature of the music, give you a little background on the songs, and allow you to become familiar with the flavor of each ethnic style.

Alright, let’s begin with “Sing A Rainbow”, a song written by Arthur Hamilton, a composer from the United States of America. Rainbows are often thought of as symbols of hope…a promise of better things to come. There are many stories about how they began and about their meaning. One story tells of Leprechauns (small magical creatures) who hide their gold in pots hidden underneath the rainbow’s end. Not too many of us have seen where the rainbow ends, but is a delightful idea just the same.  “Sing A Rainbow”, invites people of every kind and color to join together in peace and harmony…just as the many colors in the rainbow combine to form a thing of great beauty, while maintaining their own unique identity,

This children’s song hails from Germany. It is sometimes sung in different German dialects. In one, the word “Schnee” is pronounced with a long “e” as in “shnee”. In another it can be pronounced similar to a long “a” sound, as in “shnay”. You will hear a mixture of both in this recording. AND I’M GOING TO READ IT FOR YOU WITH THE “SHNEE” DIALECT. THE RECORDING OFFERS A PRONUNCIATION GUIDE IN THE “SCHNEE” DIALECT.

Often sung around campfires, this Dutch song is said to imitate the sounds a spinning wheel makes when yarn is being spun. There are other versions of its origin as well, but whatever its background, it’s just plain fun to sing. The background music is sung with the syllables “Boomda Boomda” over and over again on the same note, while the melody floats above it.

Song 5: To The Greenwood

“To The Greenwood” is a song from British history that is sung in a round. The term “round” means that each verse can be started at different points and still sung together at the same time. There are three different verses in this song with three different melodies that can be sung as rounds, each by themselves. The first time through each verse is sung solo, without the confusion of hearing the other verses at the same time. “To The Greenwood” is combined with other songs (that are also rounds) to form a much larger round.

“Frere’ Jacques” is a French tune that can be sung as a round. The title means “Brother John”. It is interwoven with the songs, “To The Greenwood” and “Row, Row, Row Your Boat”.

This traditional American song is also a round which can be sung with four different starting points. It is joined with “To The Greenwood” and “Frere’ Jacques” in the next track to form a great big international round!

“Row, Row, Row your Boat” begins this round, followed by “Frere’ Jacques”. Then  “To The Greenwood”. is added. In order to end all three songs at the same time, we asked the first two parts  to repeat the last section of  their songs, but it also works to let each group finish their songs as they come.

In the early days of the railroads in the United States, workers called “Tarriers” had to prepare the land before laying down the rails. It was hot, tiring, and often dangerous work since explosives were used in the process. A true folk tune, this lighthearted song has many verses  which tell the story of a “tarrier” who got too close to an explosion. After being tossed high in the air and then returning to earth, he was told by his boss that the company didn’t pay for time not-worked, and he wouldn’t receive money for the time he was up in the sky.

This bouncy American song has a moral: Don’t stick your nose in places it doesn’t belong. The “pshhh” sound at the end of the song is the skunk’s comment on the subject.

There is a bridge in d’Avignon, France, on which the townsfolk used to gather and dance. The instructions for the dance steps are given in this traditional song between each chorus. First the gentleman are instructed to do a certain step, which they do together, usually in a circle. Then the ladies are asked to do a different step.  As the song progresses, the steps may represent what different characters do: soldiers, babies, dolls, good friends, musicians, gardeners, etc. The chorus simply says “On the bridge of Avignon, they are dancing. On the bridge of Avignon, everyone is dancing in a circle.”

One of the most popular Christmas carols in Poland, “Luazje Jezuniu” is a lullaby for the baby Jesus. The Polish has some tricky pronunciations, especially if you look at how the words are spelled, so I’ll speak them slowly for you.

THE RECORDING OFFERS A PRONUNCIATION GUIDE.

“Congorito” is a South American song from Peru. It contains many humorous stories, but we’ve chosen only two. Each verse is sung as a solo, then repeated while everyone joins in. All sing the chorus together with harmony. You can hear traditional Peruvian instruments being played in the background. And if you listen carefully, you can feel the nature of the rhythm change when the verse moves into the chorus.

The first verse explains that someone is coming, but noone knows who it is. Suddenly everyone starts running the opposite direction, so the singer decides he’d better run, too!

The second verse tells of the street lamps  which use candles, instead of electricity, to produce light.  The lamps are being lit by the town’s lamplighter, but the singer keeps blowing them out after they’re lit!

The Goodbye Song was written for school children who must say farewell to their friends as summer vacation begins, knowing that all will be well when they meet again the following school year. It is also used at summer camps, having formed friendships that can continue long after the campers have grown past their camp adventures.

So now that you’ve had a chance to better understand these songs, start over at the beginning of the CD and just sing for the fun of it. It doesn’t have to be perfect… just enjoyable. And don’t forget to invite your friends to sing along with you, too!