Greetings to all of you this Holiday Season. Our new Vice President, Dr. Juana Watson, has shared this story with several of us. We all hope you not only enjoy it but carry its message with you as we move into 2010.

THE DAY I FOUND SANTA CLAUS. 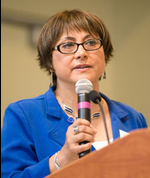 Calnali is situated between the mountains and the rainforest with the rainy season from September to November.  During these months it rains every day and every night. When I was a child, my home was made of mud and sticks, and the roof was made out of tejas (red clay tile).  Sometimes in the middle of the night we would hear loud crashes and my mom would wake up and start praying for our small home to withstand the rain.  The tejas would become heavy with the rain and sometimes the entire roof would cave in and collapse on entire families, killing them.  We always lived with that fear, and when December arrived, and the rainy season ended, we were very grateful that we had survived.

Every Sunday in the square of Calnali, people from nearby towns and villages would come to sell corn, coffee beans, black beans, different types of hot peppers, fruits, and vegetables.  Sometimes people would bring their goods in clay pots wrapped in newspaper.  My father and I would go to the square on Sunday evenings with hopes of finding newspapers and cardboard boxes.  The cardboard boxes were a luxury and hard to find since hardly anyone would leave them behind.  Everybody needed them to patch their roofs or walls after the rainy season.  We were looking for newspapers where the market had been when I found a glossy and colorful magazine page.  The image was of a heavy set man with a long white beard wearing a red outfit, and behind him was a beautiful Christmas tree and a vast array of colorful boxes. I had never seen anything like it.  In Calnali, our Christmas tree consisted of a small tree branch that my mother would wrap in pieces of cotton for the illusion of snow, something that none of us had ever actually seen.  She had a small shoe box that contained our Christmas possessions, including a small baby Jesus, with a missing foot, made of clay, a small clay lamb, a small clay cow, and two toy soldiers that actual soldiers had given to her when she and my father fed them one day.  These toy soldiers had nothing to do with the nativity scene, but my mom kept them there anyway.  As I looked down at the glossy magazine paper, I read the text out loud, hardly able to contain my excitement, “On Christmas day Santa Claus will bring presents to all the girls and boys that have been good this year.”  I hastily folded the piece of paper, stuffed it into my pocket, and ran home.  I immediately showed the picture to my mom, and since she did not know how to read, I read the text to her.  She looked puzzled and told me that she had never heard of this Santa Claus character.  I went around asking my aunts and uncles, and every single one said that they had never heard of Santa Claus.  I finally took the magazine page to Señor Ortega, my teacher who was intimidating and strict.  After he read it, he looked at me harshly and said in a scolding manner, “Didn’t you know?  Santa Claus only visits rich people, and we are poor.   Santa Claus has never visited Calnali and he never will.”  The excitement I felt was instantly replaced by a feeling of sadness and confusion, and as I walked home clutching that magazine page tightly in my hand, I repeated to myself, “But I have been good, and the story says he visits all the girls and boys who have been good.”

I left Calnali when I was eleven years old, never to return to live, just to visit.  I spent my first three Christmases away from Calnali because I did not have enough money for the bus to go back to see my family.  I remember being alone in the boarding school with three other girls who could not afford to go home either.  I used to cry thinking about my village, and the celebrations, the piñatas and the food.  Later on, when I was a teenager working in Mexico City, I did not like Christmas because I saw many people rushing to buy presents, and I was alone and poor, so I could not buy anything.  I began to see Christmas as an unhappy time once I realized that it was a time when most people gave and received gifts, yet most of us in Calnali could not.  This was a hard truth I discovered one Christmas when I was seven years old.

Many years later, my life had changed dramatically and I found myself living in an upper-middle-class neighborhood of Columbus, Indiana.

One day, some friends of mine from First Presbyterian Church, Dr. Walker and his wife Jane, invited me to go with them on a mission to Mexico to help as an interpreter.  It was a medical mission sponsored by Asbury Methodist Church.  We arrived to a small poor village similar to Calnali, and as the week progressed, I found myself extremely restless.  I wanted to bring this group to Calnali.  I began asking everyone in the group, and finally someone told me about a Mexican doctor who could recommend another group that could possibly be able to go to remote places such as Calnali.

The group that the Mexican doctor recommended is from San Antonio, and its name is TIME for Christ.  It consisted of one hundred doctors, interpreters and other volunteers.  I began calling them persistently until they grew so tired of me that they finally invited me to visit them in Texas.  I explained to them how and why Calnali was a village in need, and since TIME for Christ goes to Mexico twice per year, (once at Christmas and once in July), I knew it would be a tremendous opportunity for the people of Calnali.   I gave them a speech about Calnali, telling stories and showing the pictures of Calnali.  Finally after two years of insisting, I got a letter saying that they had decided to go to Calnali.  I was overjoyed, and I could not believe my luck.

I left for San Antonio to meet the caravan for the more than 25-hour drive to Calnali. The roads were very dangerous and narrow, with no shoulder, and one could see the cliff drop off just a few inches from the bus.  The steep road made everyone nervous and they prayed the entire way.  Towards the end of the drive a thick fog set in on the mountain, and we could not see five feet in any direction, so I decided to get out of the bus and guide the caravan on foot.

We finally arrived in Calnali on Christmas day, and everyone in the town was out, anxious to be seen by the doctors.  For most, this was the first opportunity to ever be seen by a doctor.  My parents and relatives were waiting, and the lines were already very long.  It was a very emotional moment for me to see my uncles, aunts, cousins, and my childhood friends waiting to see a doctor for the first time.  All of a sudden, I saw a familiar face.  Although he appeared sickly and aged, I knew without a doubt that it was Señor Ortega.  As he waited in line, I walked up to him and asked, “Do you remember me?”  He looked at me quizzically, so I continued, “My parents are Manuel and Maria and they live on the second street.”

“Ahhh, are you the Santa Claus girl?”

We both laughed, and then I said, “I want you to look at the American doctors and the volunteers.  Today is Christmas day and Santa Claus is here.”

It was not until the words were out of my mouth that I realized the magnitude of what I had said.  No, it was not a dream, and I was not a child dreaming of Santa anymore.  It was reality, an amazing reality that was only possible because I live in the United States, land of opportunity, where dreams really do come true.

That was the best Christmas day of my life, and I realized that for many years I had lost the true meaning of Christmas.  I was blinded by the superficiality of beautifully wrapped presents, and I had failed to see the true meaning of giving and receiving.  That day I discovered what it was to give hope to the hopeless, and friendship to the lonely.

From that Christmas on, Santa Claus visits Calnali on a regular basis.  He brings hope and friendship to the people who he had forgotten for so many years.  Once I finally realized why I stopped liking Christmas, I was able to appreciate and enjoy it once again.