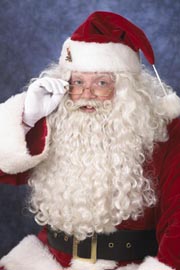 Sources close to officials in several of the Bush Administration’s departments and agencies claim that for several weeks members close to the President have been urging that the United States forbid Santa Claus from making his traditional trip to millions of boys and girls scattered throughout the land.

A high official in the Department of Homeland Security said that it had received no request from anyone located at the North Pole for permission to fly into the country. “We can’t allow any airborne craft to cross our borders without our knowing precisely where it portends to cross the border, what its intention would be, and whether it would carry any potentially hazardous items that could endanger the lives of Americans.”
A call to an unnamed official in the Department of Transportation backed up those assertions and added, “There just isn’t sufficient space on the rooftops for safe landings and takeoffs. And besides, do eight reindeer have sufficient power to get Kringle’s vehicle airborne time after time? No way!” 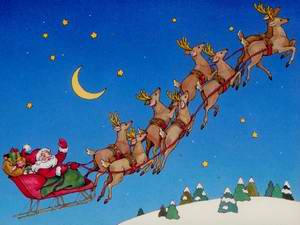 And this from a spokesperson at the Environmental Protection Agency: “Do you realize the amount of soot Claus would release into the environment by his climbing into and out of all those chimneys? Particulate counts would sky rocket in both urban and rural areas.”

Finally, a Department of Health and Human Services under secretary stated, “With the current epidemic of obesity we are trying to get the children of this nation to follow positive role models. Holy Moley, do you think that rolly polly Kris Kringle is good for American kids? And I would really not want my son or daughter to follow someone who yells out ‘Ho, Ho, Ho!’ every time he cracks his whip. I wonder what he’s smokin’ in that silly pipe he takes with him.”

Word also came from the private sector. Wally Walton, Wal Mart’s Children Services Director, said that he had contacted Santa some time ago. “I tried to urge him to make a single trip to China and leave all of the toys there. Wal Mart would pick them up, place them in containers and transport them to the United States. Think of how that would increase productivity. Santa wouldn’t have to make millions of stops at the homes of every boy and girl. We’d offer the toys at lower prices; everyone knows Santa’s toys are sky high. Wal Mart has lower prices, always! I thought we might get an agreement, but the worst thing happened. The elves formed a union and threatened to stop production if the toys went to Wal Mart. Just shows you the ends that unionized workers will go to.”

Disassociated Press has learned that there is still hope, however. President Bush has asked Condoleezza Rice to mediate. “She’s a great mediator,” he said. “Condi knows her way around. She told me about her days at Notre Dame. Christmas came early every year. Dollars flowed in like manna from Heaven. The Irish could claim victory every fall even when they had mediocre seasons. I learned a lot from her.”

So the verdict is still out. Will Condoleezza be successful? Will Santa cross the forbidden boundary and make every good little boy and girl happy? Will Santa’s toys show up at Wal Mart? Best to check your stockings on Christmas morn!